First, I am not talking about constructivism, where the only mathematical objects thought to be capable of proof are those that can actually be constructed by a finite number of steps. This approach leaves out all infinities, such as cardinal and ordinal infinite numbers, or as Georg Cantor named them transfinite numbers. It also leaves out infinite sums.

Cantor was viciously attack by Leopald Kronecker, one of the biggies in the constructivist movement. Kronecker’s attacks may in part be responsible for Cantor’s nervous breakdown as it was called back then. He appears to have suffered from major depression, and was actually stricken multiple times, including visits to a sanitarium. I am not sure if his diagnosis today would have been bipolar I because I have never heard that he suffered from any manic episodes, but I would not be surprised if he had because many creative people have been posited to have this illness.

My idea is that mathematics is constructed in the sense of being built by the materials at hand, including infinite materials and procedures. I will try to explore this notion in this blog. It is my attempt to deal with the oft conundrum of whether mathematics is invented or discovered. From the start of my blog writing I have wanted to do one on mathematics. I have been in recent conversations with a friend on this issue. This friend believes that the question here is ill-posed for a number of reasons. I do not know if I grasp his full reasoning here, but it has given me a boost in motivation to try and explore the issue.

[Disclaimer: My mathematics education only includes partial completion of Calculus I, neither am I proficient at mathematical proofs. However, I feel my grasp of philosophy of mathematics is solid enough to give this blog a whack. I also claim no originality per se, but I will say that my exploration may contain some insightful comments.]

So, let us get constructing. Constructing with what? Well, let us try Lincoln Logs. For those old enough to remember they were a construction kit made up of interlocking logs. Or, maybe you put together IKEA furniture. You have the components and those awful directions, which to the aficionado may not be so awful. A recipe metaphor might work as well, maybe even more so. You have the ingredients and the different techniques used in putting the recipe together.

Now, what is the construction of mathematics done with. The foundation stone of mathematical theory or theories are the axioms (basic statements made without proof, but intuitively acceptable) and the rules of inference (e.g. mathematical induction, symbolic logical rules, such as modus pollens (if p, then q), or the use of reductio ad absurdum, which makes use of the law of excluded middle—something is either A or not-A).

So, with the Lincoln Log analogy the logs are the axioms (admitly restricted), and ways of connecting them are the rules of inference (again highly restricted). With the IKEA analogy the axioms would be the individual pieces and the rules of inference would be the different methods of putting the unit of furniture together. However, both of these analogies are fairly restricted, especially the Lincoln Log one, but they are both constructions in a simple way like the first example and more complicated in the second.

I move on now to the recipe analogy. Here the analogy is much richer, but possibly too rich. First of all the number of possible ingredients (axioms) are fabulously greater. The same goes for the number of possible techniques. However, it has an advantage over the other two analogies. You can use another recipe or group of recipes to make more recipes. For instance a frosted and filled layer cake combines the recipes for the cake, the filling, and the frosting. So, you can move from ingredients, using various techniques, to create a recipe. These recipes in turn make another recipe. Each recipe could be considered to be a theorem and the finished cake could be a new theorem using the other recipes as theorems to construct it.

Ordinarily, you would not consider making a recipe as constructing it, but I still think it fits. This being said, I have heard of constructing a cake. And, I have also heard it said, that a mathematician constructs a proof. So, however lame my analogies are or are not, I think that there is a case for mathematics as a field of construction. And, I am not the only one: 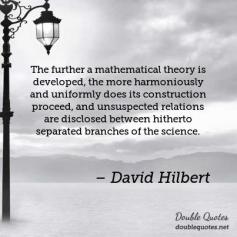 So, why am I going down this path of description of mathematics? Why am I trying to say that mathematics is constructed? The main reason is to move away from the is mathematics invented or discovered question, which some find ill posed. Will my explanation satisfy many people? It would probably sway very little of the mathematicians’ crowd (amateur and professional).

However, I do think that mathematics as a construction makes sense. The building blocks of a mathematical system are its axioms. An example of a relatively simple set axioms are those of Peano Arithmetic, which has the following axioms:

is a number, the successor of

3. zero is not the successor of a number.

4. Two numbers of which the successors are equal are themselves equal.

, then every number is in

Using these axioms and first order logic, arithmetic can be built or constructed. I will not go into any of the issues (whether it is consistent or complete) involved with Peano Arithmetic or provide any actual proofs or constructions (it is not my forte).

First, it seems to me that proving that mathematical objects reside in some sort of abode not considered physical runs into similar difficulties as proving the existence of god for which no adequate proof has yet to be provided. But, if mathematical objects are constructed (created) by the human mind, then the brains states responsible for them could be investigated by physical means.

Second, would not this type of realism require any nonphysical thought (if there be such an animal) reside in the same or similar realm. This puts us back to Platonic realism, except for physical objects, which still could reside in the real world along with us. But, there is a solution to this dilemma. Thoughts reside in human minds, and human minds alone, along with thoughts stored in some form of symbolism or signals, and minds are physical. There need not be any separate realm for any type of idea, mathematical or not.

In connection with the above it seems that people who believe in mathematical realism think it is necessary so it must be so. This is like those who think that god must exist because god would be necessary for some purpose, such as morality or creation of the universe. Voltaire said: “If God did not exist, it would be necessary to invent Him.” I think this is the unstated reasoning behind mathematical realism.

In addition this realm (of the mind/brain) need not be totally subjective. There is such a thing as the intersubjective. This is that ideas and what not reside in multiple minds. This does not make our thoughts objective in the sense of residing somewhere outside the mind. However, ideas maybe more objective than perceptions of the physical word, where I assume that no two people perceive a thing or event in the world in exactly the same way. Anyhow, I posit that minds are where any nonphysical object resides, if it resides anywhere at all, which make them ultimately physical.

I also have a question. If mathematical truths reside in a realm of their own, where do mathematical falsities reside? This is assuming they need a place to reside. Assuming it is so, does not this seem like a contradiction?

Well, this may very well put mathematical realism to bed, but does it mean that mathematical discovery is out. I will suggest that it could. That mathematics could be both created and discovered at the same time could depend on the view being taken. Think of the elephant seen from different positions. From one point of view mathematics is created by the human mind, and maybe in very rudimentary form by some animals’ minds.* From the other point of view it is a discovery in the sense that we now know what we did not know before in regards to mathematics.

Well, I am sure I have not settle the issue by any means, but I do think that my idea does make sense.

* I suggested that Baxter counts to two in a footnote in my blog Is Strong AI Possible?. Animal and baby studies have indicate that they have a number sense. Of course, this does not add up to mathematics as it is usually thought of.

One thought on “Can Mathematics Be Constructed?”