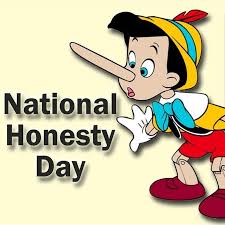 Technically, the answer to the title question is no. After all “false” is in almost every one of the definitions for “lie” both as a noun and as a verb that you will find in any dictionary. But, what about dishonesty? Is it always an act of dishonesty when you lie? So, this is what I want to explore in this post: whether or not lying is always being dishonest. I hold that honesty is different from lying. In this post I will claim that lying and dishonesty are not necessarily equivalent.

Let me start than with honesty and move on to dishonesty. After these explorations, I will then explore the relationship between lying and dishonesty. How connected are the two of them? Are they equal? Are their effects the same? Does any act of lying automatically make it an act of dishonesty? Can you lie and still be honest? My answer is going to be yes, and the same answer for lying and dishonesty not being equal.

So, what is honesty, and what does it imply about some forms of lying? To start let us explore what honesty is. As usual let me go to the dictionaries. Dictionary.com gives as it first three definitions of honest as (1) honorable in principle, intentions, and actions; upright and fair (2) showing uprightness and fairness (3) gained or obtained fairly. And, honesty is (1) the quality or fact of being honest; upright and fairness (2) truthfulness, sincerity, or frankness (3) freedom from deceit or fraud. This leads me to think that honesty is about doing or saying what is right with no intent on deceiving others. And, the key here is the avoidance of trying to gain unfairly and using deceit. Finally, dishonest would be the opposite of these things.

Some of the keywords or phrases used in the Oxford English Dictionary (OED)¹, the academic go to source for definitions, for honesty are: honorable, decent, virtuous, upright, truthfulness, fairness, free from deceit, sincere, done with good intentions, acts fairly, acquire without cheating, and free from guile. Being the OED there was much more to its entries for honesty, some of which either would play no role in my exploration or focuses on issues I would rather avoid, mainly those that do not directly relate to lying. Again, dishonesty would be described by the antonyms of these terms.

Obviously (at least to me), I feel a need to focus on deceit and intentions (I will no longer italicize these words). Hence to be honest one needs to not intentionally deceive another. Deceit here (following dictionary.com) is to conceal or distort the truth for the purpose to mislead in order to double deal, defraud, or cheat someone. Deceit does imply “to mislead by a false appearance or statement . . .” (https://www.dictionary.com/browse/deceive).

So, here we run into the problem of falsehood (a lie), but this does not mean that this would always indicate harm, and says nothing of intent. Intention implies “an act or instance of determining mentally upon some action or result.” ( https://www.dictionary.com/browse/intention?s=t). So, if one accidentally or mistakenly tells a falsehood it means that no intention has been exhibited.† Both of these put together could be construed as a case of honesty that involves falsehoods, and not implying that a lie is always a case of dishonesty.

So, what are some cases where you could consider that telling a lie is not an act of dishonesty? There is the case of a white lie; the classic being giving a compliment that is not true in order to make that person feel good or better about himself or herself. Here the intentions are good, so I think this type of lie is not a case of dishonesty. Sometimes the white lie is used to bolster one’s self-esteem, meaning no harm to another. Again, I do not think this equals dishonesty. But, one has to be careful here because it lies closely to deceiving someone for some kind of gain, such as in a job interview, which would be an act of dishonesty.

There is also another type of lie that could be considered to not be dishonest. These are what could be considered cover-up lies. These types of lies override a rule against lying, like in a deontological ethical theory of Kant with his categorical imperative, where telling a lie falls under—no lying period. So, these types of lies show that something is wrong with his categorical imperative. The classic example, so it seems, is when a would be murderer comes to your door asking for a person that is inside your house, but you say to the would be murderer, “I am sorry I have not seen him in months.” Thus, by lying you have save the live of this person. A good thing, right? I feel most people would say yes. Good intentions turn lying into an act that should not be considered dishonest, except to the would be murderer directly, but does one such person deserved to be treated with honesty.

There are also instances where promise keeping becomes difficult or cannot be kept at all. Say you promised to go out to dinner with a friend. Then, you get a call an hour before you were planning on leaving to meet your friend at the restaurant from your brother that your father has just died and requires your immediate assistance in handling the affairs. What do you think is the best thing to do here? Break your promise and help your brother or go and meet your friend for dinner. I would say helping your brother would be the most important thing to do at the moment. After all you can reschedule your dinner with your friend for another time. But, if you break the dinner engagement you have failed to keep a promise, which could be considered as having told a lie. Was this then an act of dishonesty? I would not say so because your intentions could have remained pure. You did not have the intention to harm your friend, and helping your brother would be the proper thing to do. So, sometimes promises need to be broken, which technically would be a lie, but would not be an act of dishonesty.

Finally there are times when we lie to ourselves—we deceive ourselves. Then, I ask: are there times when these lies are not acts of dishonesty? Well, can you harm yourself? Certainly. But, can you intend to harm yourself? I am not sure of the answer to the second question. Dishonesty, I believe needs the intention of doing harm to count as an instance of it. “I am okay, I don’t need a doctor,” you say to yourself after coming up lame after a race. But, what if you do need a doctor and you think your leg is alright? You certainly are lying to yourself, but are you intending to harm yourself? Again, I am not sure. If you do not intend any harm, but know you are not being honest with yourself, I think in this type of case you are being dishonest with yourself. But, the mind is a hard thing to control. We often get thoughts unbidden. What if a lie to ourselves is of this kind. You need to go to the hospital, but you tell yourself that you do not, and your leg does need medical? In addition you do believe that you need not seek a doctor? Here the mind is telling you a lie, but at the time you are not aware of it. You have no intent to harm or deceive yourself. In this case I think you could get away with not acting dishonest toward yourself. So, here is another instance of a lie being told, yet there is no dishonesty involved.

So, you can see, hopefully, that these four cases of lying are not or should not be considered acts of dishonesty. Thus, there are at least four categories of lying that avoid dishonesty. These as I pointed out above are the white lie with no intentions to harm the person(s) being lied to, the cover-up lie which prevents harm to another, breaking promises for legitimate reasons, and lying to yourself when you intend no harm thereto. There are probably other cases where lying might not be considered dishonesty, but I think these four examples suffice to give credence to my claim that not all acts of lying are acts of dishonesty.

I know this has not been a very detailed examination of the topic leading from my title question, but I feel that I have made necessary (but perhaps not sufficient) arguments for my answer. I am sure this post could be expanded, but that is not where my real interest with honesty lies. This is in what is called intellectual honesty, of which I plan to write a blog post in the future.

† I know that all this focus on definitions may seem excessive to some, but I think in philosophical discussions definitions are important. The final position I take on all these definitions is mine, and some may quibble about them, but I think they are reasonable, and therefore make the following arguments stand on firm ground.